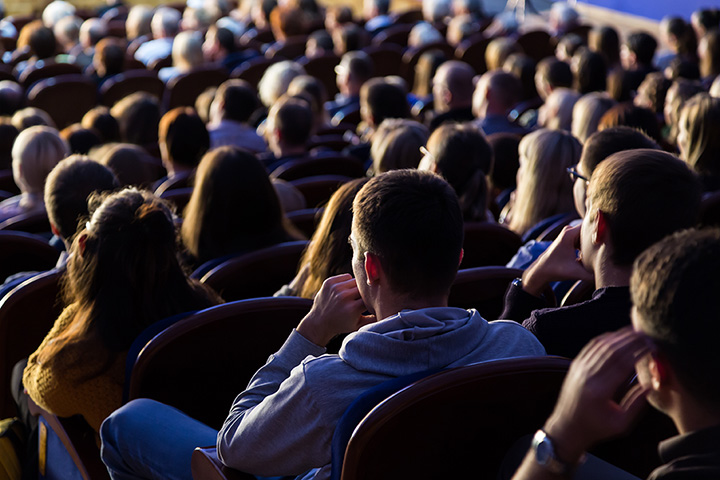 Across Kansas, community theater groups and large touring acts have been putting on top-notch shows for years. It doesn’t matter if you’re on the stage, hidden backstage or sitting in the audience, it takes a community to provide theater art. Here are the 10 best places for live theater in the state!

It is the mission of the Russell Community Theater in Russell, “to perform live theatre for the enlightenment and enjoyment of the audience,” and they have succeeded at doing just that for the last 40 years. Great hometown entertainment for area fans and opportunities to perfect local talent.

You are encouraged to “be a star” at the Iola Community Warehouse Theater in Iola. A successful community theater group who have been performing a variety of plays and concerts for half a century. Each year volunteers and good folks promote the arts through productions and develop the theater arts, in Allen County, Kanas.

A one-of-a-kind experience for audience members who attend productions at the Mosley Street Melodrama in Wichita. This community theater group is top of the list, from the quick wit of the talented writers to the sensational acting of the performers. Prepare yourself for first class entertainment and if you are lucky you might end up on stage with the cast.

Providing quality entertainment from community actors is what the Theater Atchison, in Atchison, is all about. Creating both adult and teen theater productions annually by very talented citizens, who work hard to enrich their lives and present memorable experiences for patrons. Don’t miss a performance!

Not everyone can be a star on Broadway, but anyone can be a part of the very successful Great Bend Community Theatre in Great Bend. Year after year, from start to finish, this theater troupe provides quality hometown entertainment for central Kansas on stage at the Crest Theater.

Performing live Broadway plays every year, and said to be the “crown jewel of the western Kansas art scene” there is nothing simple about the very talented Depot Theater Company members of Dodge City. The company has been entertaining area citizens and a few tourists for over 30 years. Don’t miss a minute of their main productions, their “experimental, side-tract” productions, or their renowned cabaret.

When you set in a seat at the Olathe Civic Theater in Olathe, you won’t notice the years and years of hard work community volunteers have poured into making each production. You only notice the wonderful displays of each actor and each stage hand, who have spent years and years perfecting performances. It is well worth the ticket, the seat!

Said to be one of the oldest, active community theater group in the state of Kansas, the Junction City Little Theater in Junction City began in 1949. Then and now this theater troupe of local performers and productions assistants continues to perform outstanding live theater and entertaining audiences in the historic C.L. Hoover Opera House.

The Auburn Community Theater (ACT) in Auburn began by a small group of friends who wanted to produce and act in a community theater setting. The group succeeded, and 10 plus years later the ACT theater group has grown and performs regularly at the Hussey Theater in downtown Topeka. A celebrated group who have performed some of the best community theater around.

303 East Iron Avenue, Salina, KS
Mission and History: Salina Community Theatre is a non-profit educational organization whose mission is to enrich the lives of people in Salina an... Read More

Stiefel Theatre For The Performing Arts

151 South Santa Fe, Salina, KS
MISSION The Mission of the Stiefel Theatre for the Performing Arts is to provide quality experiences that enrich, educate and entertain. The pro... Read More

3207 East Douglas, Wichita, KS
The Crown Uptown Professional Dinner Theatre is Wichita's most popular and the only year round professional theatre in the area. We have the fine... Read More

536 North Broadway Street, Wichita, KS
HistoryThe Louise C. Murdock Theatre was built as an addition to the Victorian-era 20th Century Center building in 1931. Named after the founder of... Read More

523 State Street, Augusta, KS
The Augusta Historic Theatre is a two-story art deco, brick, and glass building in the center of downtown Augusta. It was one of the first theatres... Read More

201 Lulu, Wichita, KS
If you're looking for a place to learn, act, dance, sing, perform, be imaginative, creative, think outside the box, and most of all have fun, this ... Read More

225 West Douglas, Suite 202, Wichita, KS
Mission: When Music Theatre of Wichita was formed in 1972, the founders chose to state our mission as having a two-fold purpose: to provide firs... Read More

2221 W Rita St, Wichita, KS
Wichita Shakespeare Company is a not for profit theatrical organization based in Wichita, Kansas. It is our mission to provide quality, free of cha... Read More

310 North Main Street, Hutchinson, KS
The Family Children’s Theatre was established to strengthen the self-worth and poise of each individual and to build bridges that unify the c... Read More

18 East First Avenue, Hutchinson, KS
Mission The Hutchinson's Historic Fox Theatre is a regional center for the arts dedicated to the expression of the human spirit through quality en... Read More

9 South Main, Hutchinson, KS
Read More
Show More
Select a Kansas town to find
the Best Things-To-Do and Places To Go around you